I've decided that because my meditation diary is out of date, in that I could not tell you when the following meditations took place, I will release myself of the word "diary" and just log My Meditations as and when they happen.
Meditation can be very personal to the recipient.  There are places, things and words spoken that the recipient would not want the world and its friend to know.  At this moment in time I have nothing in my Meditations that would warrant me not sharing with you as each meditation has improved over time and I would love to show to those who find it difficult to meditate that practice makes perfect!  Do it every day at least once, maybe twice, time permitting, and you will find your meditation improving and bringing you such peace and joy.

OK.  This might be fine for the more supple and nimble of human species, but I, not only cannot get in the Lotus position, but my lack of concentration due to being so uncomfortable, would not give me a fulfilling meditation.

I meditate in my conservatory on a comfortable sofa.  Feet firmly on the ground (no shoes, socks or slippers!).  Sitting into the back of the sofa so fully supported.  The only likeness to the above picture are that my palms are upright to receive all positive energies.

Before my meditation I have been taught to protect myself.  I can ask for this protection via prayer or in my own words asking for no harm to come to me, whilst visualising a form of protection around me, my surroundings and my home.  This can be a bubble, a zippy bag, a white glow or anything that I feel would protect me from negative energies.  I usually, in meditation, visualise a bubble around everything.  Sometimes I find visualising a bubble difficult, so I will sit with a lit candle in front of me and then close my eyes still visualising that lit candle.  If at anytime I detract from my visualisation I pull myself back to that candle and start all over again.  At the end of the meditation, I close the Chakras (simply moving through one to another until all are closed), there ending my meditation.

I find my meditation releases me from the worries and troubles surrounding me.  It gives me clarity of mind, even if only for a short while.  I am now looking to my Spirit Guides for help, and answers to my problems and know they will help where possible.  I now look forward to seeing them but know they are always with me anyway.

For types of meditation I undertake, see the Meditation section. 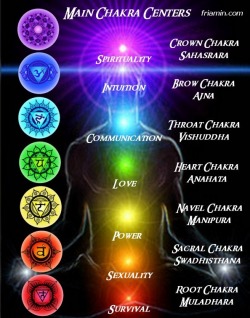 First and foremost, my intention on this particular day, was to take the time I had been given by Spirit and utilise it with a deep and fulfilling meditation.  Little did I know that Spirit obviously had ulterior motive for giving me such time!

Because I wanted to have a deep meditation I opted for a meditation using binaural beats (see Meditation section).  I performed my usual protection although this time finding the bubble was easy and I was underway in no time at all.

My first visualisation was of a purple mist.  This kept swirling in front of my eyes, clearing a little and then coming back full flow.  This went on for some minutes.  I kept seeing what looked like an outline of someone walking back and forth behind the mist.  Almost in a march.  Not unlike someone treading the carpet when deep in thought.  Back and forth, back and forth.  After a few minutes I was just relaxing in this purple mist when I saw quite distinctly an oriental looking man with long beard and wearing what looked like armour.  Upon his head was a helmet of some sort of metal, but coloured, not just metal.  It was pointed, but in stages, like ridges, which reached to a peak.  In my mind it reminded me of Genghis Khan.  I had nothing to lose but ask him "are you Genghis?" he replied "Genghis?".  I answered "Genghis Khan".  He laughed, not heartily, but a kind of dismissive laugh, and said "Genghis Khan?" as though a question!  I asked if he was from Mongolia and again he laughed and said he was now from Malaysia!  (I know, its random, but it happened).  I then asked him if he was my Spirit Guide.  To which he replied, "Yes, but I'm not your only Guide, you have many".  He was very colourful in his clothing, although covered with an armour of sorts.  He looked quite powerful, yet had playful eyes and smile.

I recently met with a psychic artist through my Development Circle leader and we were presented with a book of sketches he had drawn for our Circle before meeting with us.  On presentation of this book my Circle leader and I looked through the drawings and suddenly the picture below was in front of us.  I was absolutely stunned as the picture is of my Spirit Guide, affectionately now known as Genghis, in similar colourful clothing he wore under his armour in my meditation.

As "Genghis" only laughed at my suggestion of his name and did not divulge or corroborate his name, he will remain as Genghis until I'm told otherwise.

It was a lovely sunny day and I decided, as I often do, to have a spur of the moment meditation.  Sometimes these are the best meditations I have, because there is no planning involved.  I just sit, breathe deeply and off I go.  This day was no different, except as I breathed deeper and went deeper into my meditation I found myself in a swimming pool.  I was just standing in the water alongside the wall of the pool.  I could hear children laughing, but most obviously I could see two babies standing on the side of the pool ready to jump.  They looked most definitely like twins and had no safety rings or armbands on.  I immediately felt alarmed and protective of them as they were ready to jump in the water, but were obviously waiting for the right moment as they kept looking deep into the water as though trying to find something or someone.

I then looked to the left of where they were standing and saw a man swimming towards them.  Only his head was visible, bobbing up and down as he swam under the water and came up only for breath.  The babies were now laughing and holding hands.  As the man approached alongside them they lifted their arms and jumped on top of him, hitting his head.  Startled, the man swam to the pool's edge.  All I could see was blood dribbling from his head, a wound no bigger than an inch and he was now laughing at the babies.  They were not laughing now, but swimming quite proficiently to the water's edge.  As they rose out of the water, they started to cry realising they had hurt the man!  I turned to my right as something, I'm not sure what, distracted me from the situation, but when I turned my gaze back, both babies and the man had disappeared!

I am still not sure what this meditation meant ~ so any ideas would be gratefully welcomed!

I KNOW THERE ARE FOUR BABIES, BUT I COULDN'T RESIST THIS PICTURE! 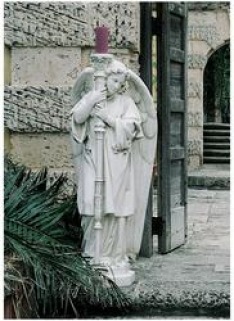 Purple mist and later bright yellow arc above my head.

Angelic statue - wings folded - not unlike picture above.

Conversation with someone - not sure who - about not being able to do massage, yet saw my crystals scattered all around.

I saw two young children, dressed 50's style, running up and down a terraced street.  There were houses on one side and a long whitewashed wall on the other.

Memories:  Mum and Dad (my mother and father in law) talking to me at their home.  Mum getting up adjusting her trousers and smiling, going up on stairlift.  Dad telling me she hadn't been too good!

Which brings me to reading The Secret and makes sense of the phrase used "I am the Master of my Thoughts"!   I was indeed!

My Dad, Nan and mother in law were all around.  Memories were recalled as well as general talk.

I felt my brow being touched, almost like something/someone moving my fringe

I felt my right hand being touched ever so lightly

A whooshing feeling from left side to right side of body, almost akin to the movement you feel in the sea, when bathing.

I was cold at one point, but comfortable.  Mainly on my face, my nose was cold similar to being out in the snow.

Memory:  Mother in law was in garden on bench sunning her (milk white) legs, laughing.  I was sitting next to her doing same.

My Nan was on a beach picking up shells and smiling.

My Dad just stood watching me from right hand side, then stood with my Nan.