When I first joined my Development Circle, I experienced feelings, sensations and was highly sensitive to the feelings of my fellow circle sitters.  I later found that I am apparently clairsentient in that I have an ability to feel varying sensations around me.  During meditation I have felt a pit patting in front of me, like an animal walking back and forth.  I have felt deep sadness in my heart and also sometimes a spinning feeling when told of something sad, almost to the point of crying, yet I do not know the person or persons talked about.  I feel different strengths of energies when passing over chakras in both humans and animals and can feel blockages and sense when a chakra is spinning the opposite to all others.  I have felt a blockage in a chakra that almost hit my hand away from the person I was attempting to heal, and actually saw that blockage as an anvil, which when it hit me, was quite painful.  I feel heat and cold as well.  The feelings can be immediate or take a little time.  I have feelings in my own chakras such as a pressure on the crown or third eye when dealing with negative energies and have felt and healed my own sluggish solar plexus chakra.

To this end, I am now trying to use the clairsentient ability to the greater good by giving healing in whatever capacity I am able. 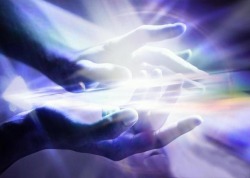 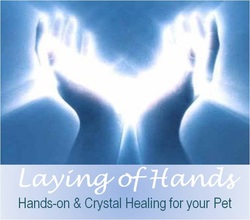 Please feel free to visit my sister site Laying of Hands.  Created for the healing of pets with stories, information and a general glimpse into healing for your Pet.  (This site is still under construction, but new items are always being added).  Thank you for visiting!

Recently I was sitting in my kitchen and my two cats were outside in the garden.  My cats, Ellie and Whiskey are sister and brother and go everywhere together.  When you see one, you can be sure the other is not far behind.  On this particular day Whiskey kept following Ellie, but Ellie was having none of it.  She hissed a couple of times and even tried to scrap with Whiskey.  I called her indoors and Whiskey decided it not a good idea to follow.  Something told me she wasn't feeling too good.  Every time I tried to pick her up she would run away and ended up jumping from chair to chair and running around the kitchen like someone or something was chasing her.  She was definitely not a happy cat.

I eventually managed to pin her down and took her up in my arms and gave her a cuddle.  I decided that whatever was ailing her might be found if I could feel her chakras.  I gently laid her on my lap and held my hands first over her crown chakra.  Immediately she stopped trying to jump of my lap and just sat quietly.  I kept my hands there for a moment and then moved along to her third eye and then her throat chakra.  Everything seemed okay and she was quite content to let me continue.  I then held my hand on her chest and back feeling for her heart chakra which was warm and spinning nicely.  Moving to her solar plexus I found nothing, but as I approached her sacral chakra, she almost moaned and I felt as though I was trying to breach a hard object.  I kept my hand over this area for about a minute and could genuinely feel the object dissipate and a natural warmth coming from that area.  At that moment Ellie turned onto her back and lay on my lap legs akimbo and started to purr.  She almost looked as though she had a smile on her face.  Once I was satisfied that her sacral chakra was working fine I proceeded to her base chakra.  Here there were no problems as Ellie decided to terminate my session by kicking her back legs towards my hands and lifting herself off my lap, onto her bed and promptly went to sleep.

When I turned around Whiskey had been sitting beside my chair, obviously watching the whole thing and once he was sure all was okay, climbed into the bed beside Ellie and quietly cleansed himself before going to sleep too! 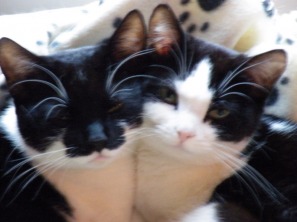